Ever wanted to edit my patches? Or maybe… make your own patches? Well, or to assign different bats to different players, edit their abilities, bowling speed, squads, statistics, birthdays and even more! You can create your player, then add yourself in squad, assign a bat for you, and can do much more stuff with Player Editor07 !Here’s a small tutorial or preview of the Player Editor07:

..and here are some screenshots of Player Editor07: 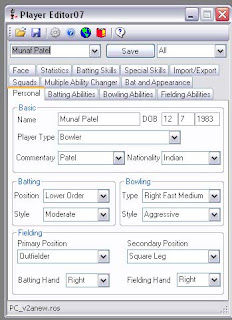 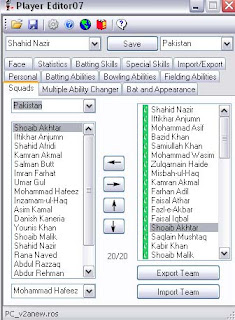 Pretty cool, eh? So what are you waiting for? Probably tutorials right? First, let’s see the FAQ posted by the creator, Barmyarmy:

Anywhere you like provided the xml file is in the same directory. The editor will tell you if it’s not

I get this error: “PlayerEditor07.exe Application Error ” The application failed to initialize properly (0xc0000135) Click OK to terminate the application”

You will need the .net 2.0 Framework for this editor to run – Get it here

I’ve entered the paths wrong/want to change them

Edit the bats.xml file using a program like xml notepad and clear the fields for C07 path and ImpBigPath.

How do I make/find the roster file?

The bat and face files are in different formats which no-one has been able to work out.

Obviously you get paid to make editors so I should constantly bug you for updates, point out all the flaws and demand new features.

I do this in my spare time. I’m happy to recieve feedback and bug reports but if I see any posts with “urgent, fix this now, make this” in I will be deleting them and probably negative repping you into the bargain.

Who else should I thank for this?

This is a 64 bit issue and I can’t fix it at present. In your bats.xml file set previews to false and the editor will run.

Some Important Notes To Read: